Climbing on to a low mound Ross McMurray surveys the view. "You know, if we put a tee up here then we've got another way to play towards the 16th green. It would make a great par 3". Ross is standing between the 17th green

and the 18th tee at Mill Creek Golf Club, and Looking for different playing options has become second nature during these site visits. “There's a long par 4 that would work from here to the 15th green as well", he continues,

“straight down the 16th fairway". The rest of the group turn their heads to look at where he is pointing, but shaper Steve Crotty is gazing in the other direction, "How about you shoot down the 18th fairway from here and then over to 14 green?" One of the tricks the team has learned is to turn around and view golf holes in different directions to check shotlines to alternative greens and along adjacent fairways. It's all part of what makes Mill Creek a unique golfing experience.

Mill Creek Golf Club, is our second golf course to be built in Russia. Located on the outskirts of St Petersburg, about 45 minutes to the east of the city centre, the 280 hectare site was flat, open and unremarkable. The topsoil was predominantly heavy silt and clay and there was less than a metre between ground level and the water table. A network of wide ditches crossed the landscape to ease flooding problems. But this was in 2013. Fast forward to 2018 and there is a magnificent golf course built in a links style with a vast lake system and the first phase of luxury housing already constructed.

Planning began in 2011 with an initial brief from client Sergey Borisov to develop a scheme which successfully combined championship golf course facilities, lakes for visual amenity and water based leisure facilities, luxury housing, a beach club and a commercial zone. We worked with WATG to produce an innovative master plan with

golf at its core. Residential development was concentrated around the perimeter of the property to provide

extensive views across the site. Three large lakes and several smaller ponds created extensive water frontage for both golf and housing and helped to further separate both land uses. The planned golf facilities included a 7,200

However, what set the golf course design apart from anything else we have done before was Mr Borisov's wish to develop concepts which could allow multiple courses to be played within one 18 hole layout.

The first initiative from the design team was to incorporate two teeing areas on each golf hole with the specific aim of creating two separate championship length golf courses (the 'Red' and the 'Blue').

Although both courses would play over the same ground each would have very different playing characteristics with alternative strategies and challenges. Bunkers and other

hazards were cleverly incorporated into the layout so that

they work for both courses but, importantly, without feeling

out of place or redundant. Of the two courses the Red Course is slightly longer, playing from 5,175 to 6,645

As well as the two courses within one concept we also

examined other options, taking on board Sergey's wishes to create a form of cross-country golf. Tees were Laid out to offer alternative directions of play with options to play to different fairways while greens were designed to accept

shots from two or even three different directions. Sergey has termed this 'Kaleidoscope Golf' and his innovative concept is protected by a patent of invention. There are also additional options to play several six or nine hole par 3 courses around the clubhouse. During construction additional alternative golf holes were often discovered and the team adapted and adjusted the contouring and grassing lines to increase the variety of options for play.

sand below the heavy onsite topsoil. 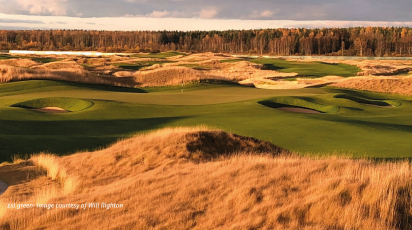 The sand inspired the designers to take elements of seaside golf and combine them with more modern design influences to create a golf course style that wouId be new for Russia and help to establish Mill Creek's individual character. Excavating the sand for lake

construction would also allow key zones around the site to be

elevated in order to alleviate flooding and to facilitate surface drainage. The by-product of this excavation would be 50 hectares of lakes which would become the complimentary focus of the resort

element of the project. 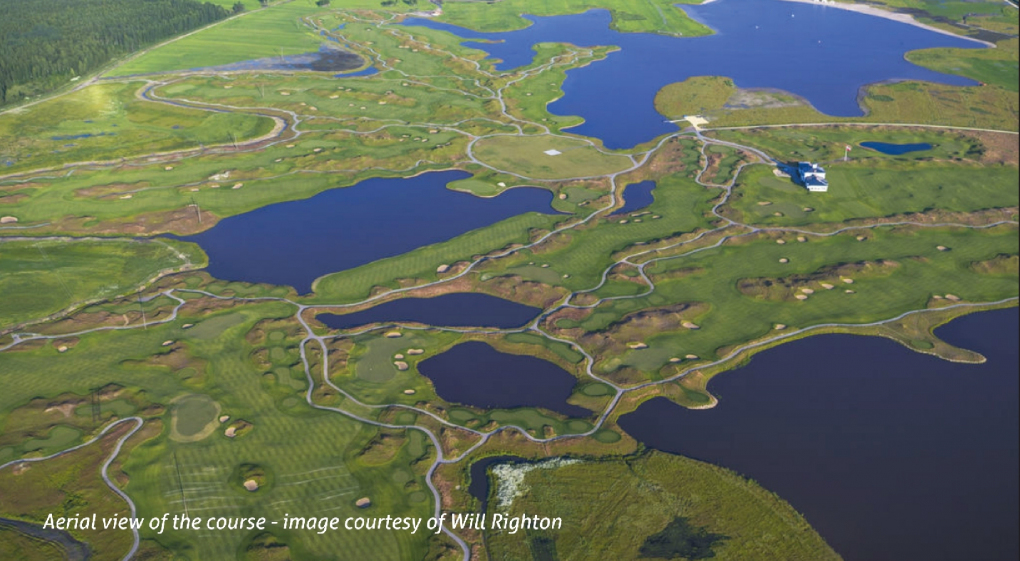 Construction began in the summer of 2014. The project was managed by Mill Creek's own development team, led by Denis Kotov. ENGO from Slovakia were employed as the golf course contractor with BraemarGolf providing golf

from Victor Jamieson. The team was ably assisted by interpreter Anastasia Petrova. 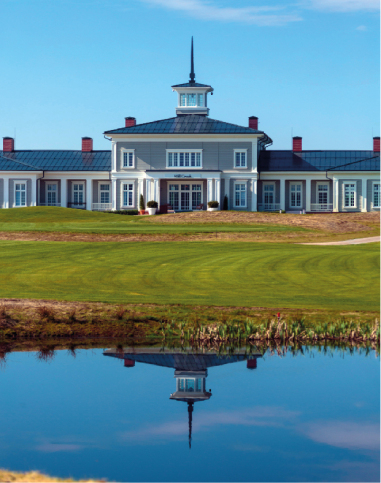 What has been created is a visually spectacular golf course with

humps, bumps, swales and hollows reflecting the links character of fairways and greens while rugged, fescue covered mounds line each

hole. The frequent windy conditions help to reinforce the sense of links golf.

construction were completed in June 2017. The man responsible for the establishment of the golf course is Will Righton, formerly Course

Superintendent at both Navarino Dunes in Greece and Marriott Worsley Park, two other EGD courses.

Although Mill Creek has a number of unusual features not normally

Actually it's two championship standard golf courses, but who's counting?

This article first appeared in the E-Magazine Issue 2 - Spring 2018.